Flew into Lima, Perú around noon 14 January 2016 and biked to a hostel in Miraflores called Pariwana.  Miraflores is a more affluent suburb of Lima.  Next day, I went to an ocean park and took this picture. 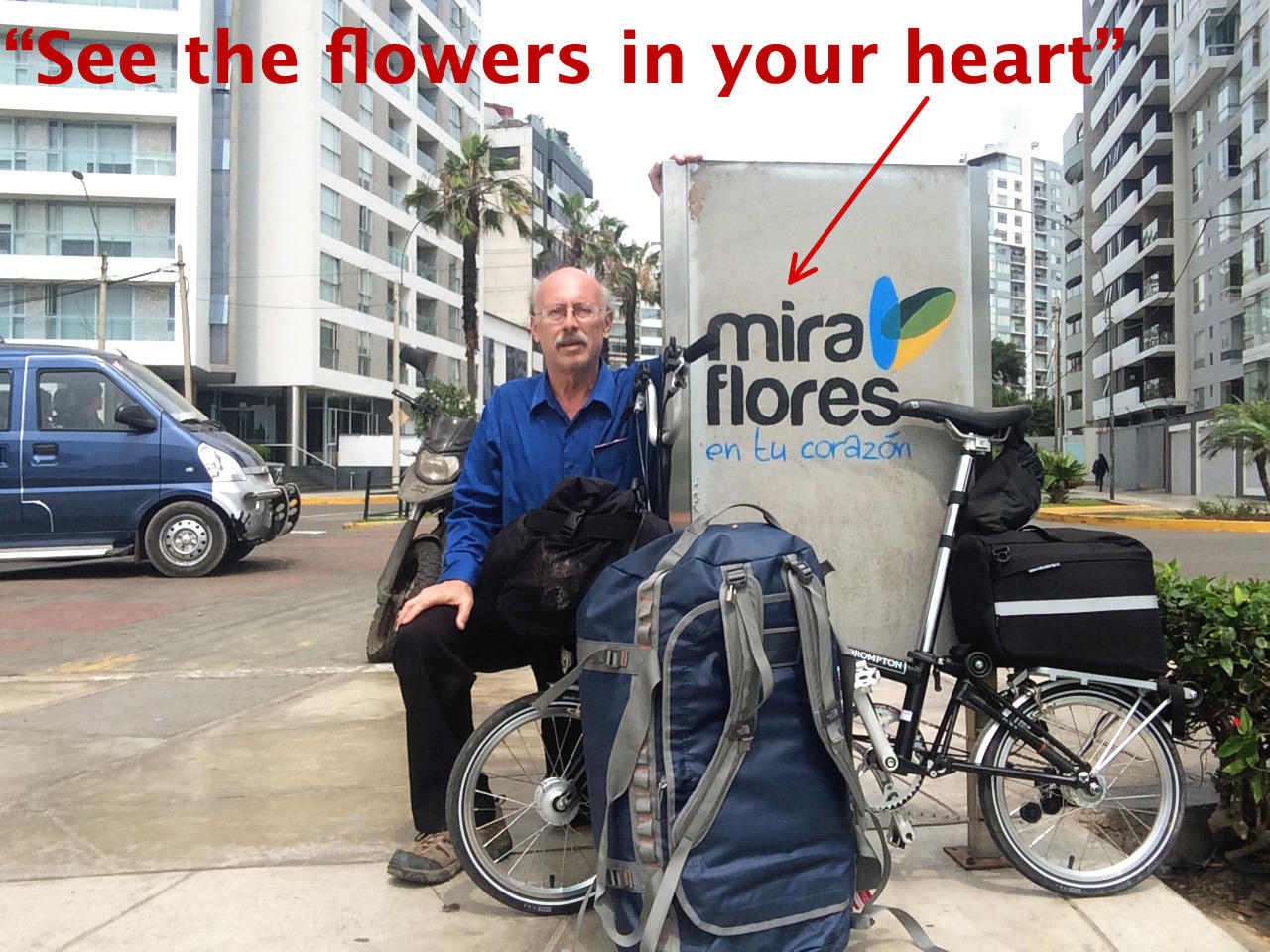 On the 18th, I moved inland to Huaycán.  Stayed nine nights upstairs at a clinic run by nuns called Casa Naturista.  I paid 25 soles a night or a total of about $55.  Garbage truck came by more than once a week playing a song that roughly translates “Neighbors, time to bring out your trash!  Let’s keep our city pretty!”  Then I moved up the mountain to a shack where I stayed for free.  (But I did some electrical and plumbing work on it.)

In Perú, large companies are buying a lot of the land.  So lots of subsistence farmers are displaced and thousands a year move into Huaycán.  My shack was at the edge of both electric and water supply, but one day, I shut off the breaker to put in a socket for a refrigerator.  The lady who showed me to the shack, Susana, had already bought a refrigerator for it, and I just had to pay for delivery.  Under twenty soles, almost five dollars.

Shortly after starting the project, someone knocked on the door and said they had no power.  Investigation showed that a dozen shacks higher up the mountain were unofficially supplied by the breaker in my shack!  So, I put in a separate breaker for them.  Susana would go around every month and collect money from all of them to pay the electric bill.

The following day, someone came complaining they had no water.  Turns out the water meter on my shack was also unofficially supplying a dozen houses.  The pipe went up the side of a rock cliff and something (probably a dog) had knocked rocks off the cliff and broke the pipe.  So, two days getting supplies and fixing that.

I went to Huaycán with the thought that I would help in a school, but the people running the school forgot there was no school that week!  So instead, when I wasn’t working on the shack, I just wandered around the mountains and valleys.  Returned to Lima and rented a room from a lady who calls her place “Mama Backpackers.”

Flew to Iquitos in the jungle 12 February.  There were no roads into Iquitos then.  Now, there’s one connecting it to Nauta, but to get to either town from anywhere else, you need plane, boat, or machete.  Stayed at “Flying Dog” for a night or two.  Then, to get to Project Amazonas, the route is three hours by boat on the Amazon to Mazán, fifteen minutes by mototaxi to another village, then another boat trip on the Mazán tributary.

For a week there at the cabin, I drank filtered rainwater, ate food cooked by propane from a freezer powered by the sun.  I examined the solar power system, identified and replaced some bad batteries, and made a couple of improvements.  I was supposed to create a technical manual for the system, but I lost some of my notes and never got it done.  I did, however, leave them with a page or two on troubleshooting and maintenance.

Walked some of the trails into the jungle, swam in the Mazán tributary, and read electronic books when I wasn’t working on the solar system.  Slept under mosquito net.

Back to Lima 23 February 2016.  Another article will pick it up from there.